The Coming and Going of Internet Phenomenons 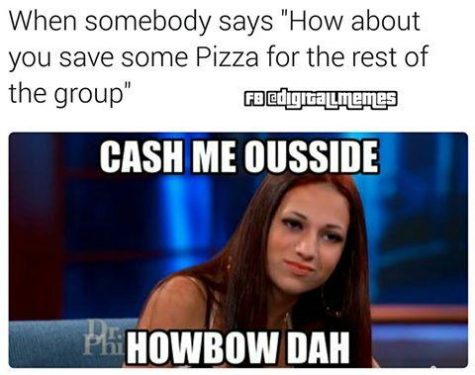 Internet trends and memes are celebrated
by many, but are easily forgotten. This is because
they are constantly being created, almost
daily, so they become forgettable as the general
public moves on. Whether it be a makeup trend,
YouTube challenge, or a funny picture surfacing
on Reddit or Tumblr, it’s always fun to look back
on the past month to see just how much we’ve
been through in just 30 days.
We all remember the hit video with
the “cash me ousside, how bow dah” girl, also
known as Danielle Bregoli. Although the video
of Bregoli on the Dr. Phil show surfaced back
in January, its Internet presence has not ceased;
if anything, it has soared to new levels. A new
game available in both the iTunes App Store and
Google Play Store called “Cash me outside” has
been released. In this game, you run, jump, and
collect gems. “I just LOVE the cash me outside
game; it’s like hashtag: SO COOL,” explains Sarah
Mack (9). Although this game has very little
related substance to the original video, it just
goes to show how popular one 30-second video
can get.
Another trend that surfaced a while ago
but is still going strong is in the YouTube makeup
world. The idea of silicone makeup sponges
seemed crazy, but when popular YouTubers like
PatrickStarrr and NikkieTutorials found that it
worked great, a trend was set off. Now people
have taken this to the extreme, trying out wild
things to apply makeup with, such as balloons,
socks, and some other, more unique choices.
Yet another craze that sprouted from videos on
Instagram, YouTube, and Twitter are DIY slime
videos. Slime has become popular in homes, as
it is easy to make, fun to play with, and makes…surprisingly nice sounds. Slime-poking videos
are especially popular on Twitter, and students
in Falls Church have been hooked on the gooey
substance. “I like it because it relaxes me, I like
the way it feels; it’s so therapeutic and stress relieving,”
says Raheel Levine (9).
Trends certainly come and go, but it can be fun to look at the month, or the year and
think about the trends of the times. Remember
the “dat boi” meme? Or the popularly loved,
popularly hated mannequin challenge? It’s exciting
to see how fast trends cycle through our
social media feeds, and how exciting it is when
new things come out.