The Reqs for a Good Rec

How Teachers Write their Students into College 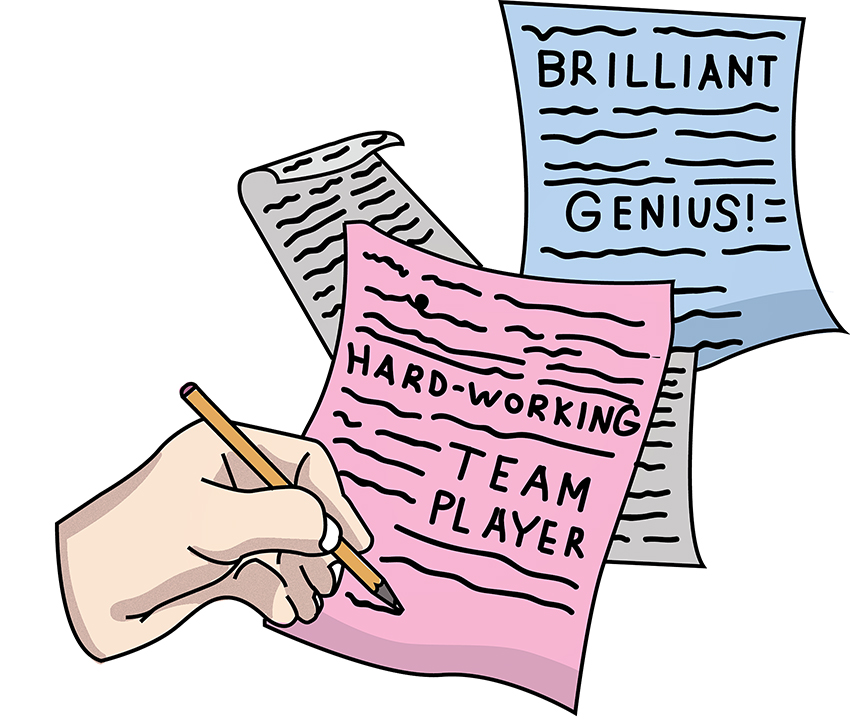 Every fall, students make pilgrimages to their favorite teachers to request letters of recommendation. However, because most applicants never see their letters, many don’t understand the complex process that many teachers go through to produce this vital part of their application.

Tasked with summarizing their entire relationship with students into a few paragraphs, many teachers take their time trying to make their recommendation accurate and flattering. “[The time it takes to write a recommendation letter] ranges from about 30 minutes to an hour,” said math teacher Paul Naanou. “I recognize that applying for college is a big next step for a lot of people, and I want to put my best work forward to offer the best representation of that student.”

Much of the time teachers take to write their letters is spent reflecting on their experiences with the student in question. “I refresh my memory as far as the student’s performance in class, their interactions so that I can give a holistic picture of who they are as a student,” said English teacher Aimee Cutini. “[They’re] more than just numbers on a page.”

Students seem to be aware of the material that goes in these letters of rec, as they choose which teachers to ask based on whether or not the overall class experience was positive. “[I chose] Teachers that I know understand and have seen my growth and potential, and that I have worked with in the past,” said Kayla Nguyen, 12. Other students, such as Jason Phan, 12, had similar ideas, but with a harsher opinion on the quality of writing from the teachers, “I chose teachers who I know would put effort into writing a rec and I did well in their class.” While students might know the general structure of the letter of rec, they seem to have a misconstrued idea of its specific contents. “I believe teachers write about hard work and perseverance because it shows potential to do well in college,” said Kayla. This sort of blanket statement is contrary to how teachers actually write, as previously mentioned.

With this all in mind, there is still a letter of rec that is extremely important, yet students seem to know very little about it: the one that comes from the student counselor. Some colleges, such as Virginia Tech, do not require recommendations from teachers because, according to the speech given during their official campus tour, “anybody can write a statement of how ‘wonderful’ a student is, so it doesn’t help us with admission.” However, even these colleges require a letter from the counselors. Students, such as Kayla, assume that counselors spend very little time on each letter due to the sheer volume that needs to be completed, “I believe that they directly quote seniors from their questionnaires.”

Kirsten Wiley, a new counselor at Falls Church, is adamantly opposed to solely relying on the questionnaire; “In general, typically I do have some type of relationship with my students, where I can comment on their character and information they’ve shared with me.” Wiley went on to say that, while she does need to rely heavily on the student questionnaire for insight into the student’s life, she almost always attempts to establish a personal relationship with each student, and incorporates that into her letters of rec. She also heavily emphasized how much she enjoys students, not just seniors, but all classes, coming by and telling her about developments in their lives, instances which she often transcribes in her letters; “Nothing better than [students] sharing good news with us because a lot of the time we’re putting out fires. So just popping by and saying ‘hi’ to the counselor, letting us know what your interests are.”

One thing that Wiley emphasizes the most is that teachers and counselors alike put a lot more effort into letters of rec than you might assume, and that they genuinely do care about your success in the future. They want you to open up and talk about yourself and your experiences, not just academics. “It’s incredible to see what students have accomplished at such young ages, that it’s truly a gift to be able to write the letters of rec and I really enjoy them, but I wish somehow we could break down that fear of students sharing information about yourselves.”