The Tradition of the Candy Heart 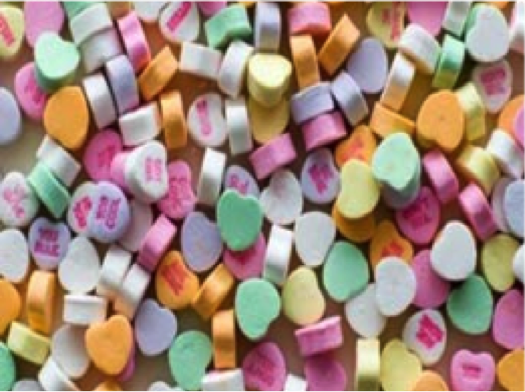 Every year, on Valentine’s Day, there’s a scramble for love.  Haggard husbands rush to find to find the right chocolates for their long suffering wives.  Elementary schoolers prepare the Valentines to give to their class.  Young lovers blushingly give each other lace edged hearts with “Roses are red…” on them. Every year, the rush for the candy has begun.

One of the most popular sweets to give your Sweetheart are conversation hearts. For more than one hundred years, the New England Candy Company (NECCO) has come up with the sweetest ways of saying “I love you.”

In Abraham Lincoln’s day, the candy hearts definitely looked a little different. Originally, the “Luv U” and “Be Mine” were printed on slips of paper and tucked into candies shaped like a conch shell. In 1847, Daniel Chase, one of the founders of NECCO discovered how to print the messages directly onto the candies. Messages such as “Kiss ME” and “I’m Yours” have been around since Chase’s day.

As popular culture evolved, so did the conversation heart. Over time, the actual candy became a heart instead of conch-shaped. In the 1990’s, as new technologies were developed, the candy heart adapted. New messages such as “Fax Me” were relevant during the ‘90s, and as those technologies become obsolete, candy hearts moved onto the newer tech.  In recent years, “Tweet Me” will be among the repertoire of these messages. Absorbing popular culture, “Live 4EVR” became popular along with the Twilight saga.

The messages of these sweet love notes are not the only things that have evolved since their invention. Many will remember the candy hearts of grade school- the chalky feel of the hearts, with the almost crumbly texture.  In recent years, as the formalization of the candy heart recipe was undertaken, the candy hearts have lost their chalkiness, and the pastel colors of the past have been boldened into vivid, popping colors.

Candy hearts can hold many happy memories for many people. Which message is your favorite?